You are here: Home » Scarlett’s 4-month Well-Baby Checkup, and Our Pediatrician’s Curious Take on Autism and Vaccines

So Scarlett had her 4-month well-baby checkup this morning.  She weighs in at 11 pounds 10 ounces and is 24 inches long (or 2 feet tall, which is more fun to say).  She is perfect! 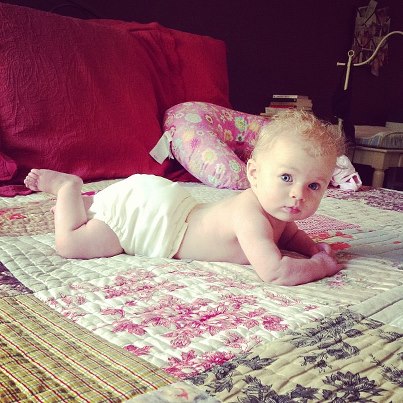 After the routine physical exam, the doc says to me, “So, still no vaccines?”  “Nope,” I say.  Okay, you’re not really surprised at this, coming from a home-birthing, cloth-diapering, extended breastfeeding mother, are you?  Not that not vaccinating necessarily goes hand in hand with those other things, but, well, it is true that “crunchy” parents (and I only consider myself to be “crispy”) tend to be less inclined to vaccinate their children, or at least to be choosy about which vaccines to go ahead with and on what sort of schedule.

Without going into a whole song and dance about our reasons for not vaccinating (because I wrote about it a while back here), I’ll just say briefly that, although our five older kids are vaccinated, Finn remains unvaccinated, and at least for now, so does Scarlett.

So here are some things the pediatrician had to say to me this morning (paraphrased):

After relaying all of this to me, he asked me again, “So, you’re sure you don’t want to vaccinate Scarlett today?”  “Yep,” I said.

Also, this is the same doc who insisted to me a month or two back that Finn’s eye turning inward is all in my imagination, it’s an “illusion,” but then Finn was diagnosed with strabismus by a pediatric ophthalmologist shortly thereafter.

Now you may be asking why we stick with this pediatrician!   Well, habit, I guess.  In all honesty, we’ve been with him for almost 16 years – since Kevin was born.  And generally I like him.  But it does seem that the older he gets (and he’s only a few years older than me!), the more radical his idea become, and the more we differ in our approach to certain things.  I guess I’ve learned to take it with a grain of salt.  Take what works, and leave the rest.  I’m okay going to him for routine stuff, but, yeah, obviously I don’t rely on everything he says.

As for vaccines, I’m not some nut job, and Jenny McCarthy is not my role model.  I wish people would give those of us who don’t vaccinate the benefit of the doubt, and instead of assuming we’re deranged, assume that we’ve given the issue careful thought, we’ve done our own research, and have perhaps just come to different conclusions than other parents have.  I don’t know what causes autism, but neither does anybody else to date.  When someone figures out what does cause autism and how it can be prevented, if the time ever comes that all vaccines are deemed completely safe for all children with no risk of side effects or neurological injury, when there is no longer any need for the National Vaccine Injury Compensation Program – then come and talk to me about my parenting choices.

46 Comments on “Scarlett’s 4-month Well-Baby Checkup, and Our Pediatrician’s Curious Take on Autism and Vaccines”