You are here: Home » Techno Kid

Finn plays with the iPad a lot.  So much so, in fact, that we actually invested in a second iPad (for me) because he and I were basically, well, fighting over it.  I’d be reading a book on it, and he’d be raising hell because he wanted to play on it.  Although we’re certainly not parents who give in to their kids’ every demand or buy all the latest gadgets their kids want (we’re one of the only families I know that doesn’t have a Wii, or even a flat-screen TV), the iPad is a different story.  More and more, it’s being utilized in classrooms, and even Finn’s speech therapist sometimes uses one with him and her other students.  It engages him, it’s interactive (rather than passive, like watching television), and he’s learning from it.  More so, in fact, than I realized.

I was shocked to discover recently that he recognizes most of his letters.  I did not teach him this – I’ve never been a flashcard-wielding parent with any of my kids, it’s just not me.  And he’s not learning this in preschool, either – the preschool he attends is not academic, but rather, developmental.

Do you know what this means?  If he can learn his letters, he can eventually learn to read.  And before you say, “Of course he’ll learn to read,” let me just say that while many, many kids with Down syndrome do learn to read nowadays, some do not.  I try to maintain reasonable and healthy levels of optimism and realism with regard to Finn’s capabilities.  Even so, I was surprised at how much this surprised me.  Maybe because it happened without any person’s intervention – it was just him and the iPad.

Not only can he identify letters, he can match those letters up with words that begin with letters he is presented with!  I won’t go so far as to say that this is reading or even pre-reading, but it’s certainly a step towards pre-reading.

I’m suddenly feeling very, very fortunate that Finn was born when he was.  There is so much educational technology now, it’s relatively easy to access, and the benefits are undeniable.  It’s hard to say what studies will show in ten or twenty years, looking back and comparing the educating of kids with intellectual disabilities in this age of technology versus educating them just a half a generation prior, before the technology explosion, but I imagine there will be notable differences.

Here are some of Finn’s favorite iPad apps:

Alphabets in the Zoo 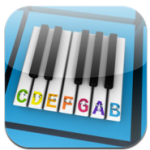 Let me know if you have any apps you’d like to suggest!